With this convenient guide, Warne Scope Mounts can help you evaluate all the bipod mount types and pick the best one for your application.

The advantages of using a bipod should be obvious, but if you are not convinced, let’s look at a different type of shooting: photography. Sure, anyone can take a photo with their smartphone, but the people pursing quality shots know the benefits of stability. Professionals use monopods and tripods quite often — especially when the lenses they use are big and heavy.

Bipods are used by hunters, and competition shooters but they are most popular with long range shooters, because the slightest movement even a bump from a heartbeat can throw you off target if not on a stable rest and a bipod is a stable rest that can form to uneven ground and is lightweight and portable attaching to the front of your rifle compared to carrying a sandbag in your shooting bag. The ability to adjust to uneven ground to make it solid ground when taking aim is a tremendous advantage for distance shooting. But attaching that bipod is another matter.

At Warne Scope Mounts, we want to help you get the most out of every shot. We’ll walk you through the types of bipod mounts and how well they may work for your build.

A bipod is a platform with two legs for your rifle, usually mounted at the very front. The two legs offer horizontal and vertical stabilization, no matter what position you are shooting from. In fact, bipods become close to necessary in certain awkward shooting positions. And because the ground can handle much more weight than your arms, a bipod helps you reduce fatigue and increase accuracy — shaky arms aren’t exactly optimal. 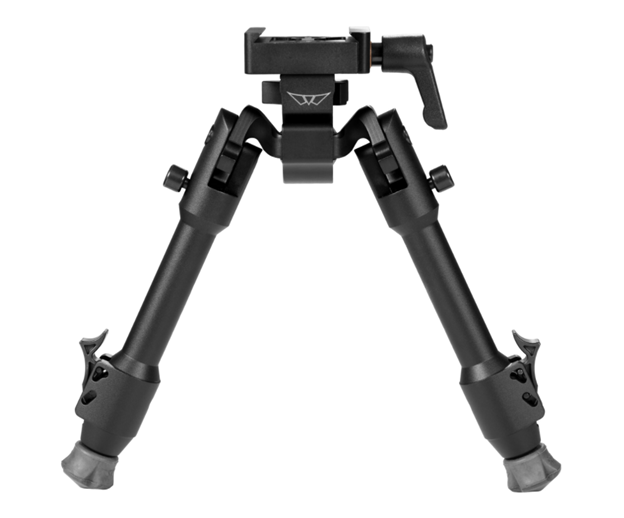 Most bipods fall in this category, because it’s a big one. Basically, a traditional bipod offers that stable platform with some sort of swiveling or rotational action for sharp aiming. You’ll find plenty to choose from. Including weights and materials.

You’ll also find variety in the extension of the legs and the grip on the feet. You can choose between spikes, claw feet or more, based on your shooting situation. But the most important variety you’ll encounter is how they attach to your rifle. We have adapters for different types so that you can find a bipod that works.

Standard issue for military, grip pods allow for a quick switch between standing and laying down. Mounted near the front on a Picatinny railed handguard.

The Latin probably makes it obvious: Mono is a Latin word one, so a monopod is basically “a stick.” This is one of the most common tools for photographers shooting sports or news events, because they are compact, quick to deploy and easy to transport. In shooting situations, however, their mobility is offset by a lack of stabilization.

When it comes to attaching bipods to your build, several of the same systems for scopes also work as types of bipod mounts:

Our staff of shooting experts is ready to assist with all the different types of mounts available for your build. We have more than 30 years of experience producing quality products here in the U.S., and we can help you find an option that gives you confidence in every shot.