Firearms from the Finnish manufacturer Tikka are some of the best-reviewed models in the industry. Known for outstanding out-of-the-box per 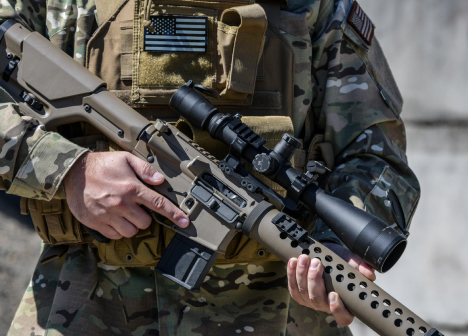 Have a question or need help finding a product?

Speak with an Warne expert now!

Firearms from the Finnish manufacturer Tikka are some of the best-reviewed models in the industry. Known for outstanding out-of-the-box performance, accuracy and trigger performance, the company's T3x models have become popular in the U.S. and around the world. Whether they stay on the range or adventure out in the elements, Tikka shooters have been able to count on their firearm to handle the elements and deliver at the right moment.

As every hunting and sporting enthusiast knows, rifles are never interchangeable and neither are the scopes and mounts that help you hit your mark. Since its founding in 1991, Warne Scope Mounts has believed that you should have confidence in every shot. Designed for shooters, by shooters, and building off John Llewellyn Warne's decades of innovation in the firearms and accessories field, we manufacture firearm-specific scope mounts and rings, including options for the Tikka.

Sako designs and manufactures Tikka rifles in Finland. With extreme precision and durability taken into account, Tikka ensures its firearms deliver 1 MOA accuracy before being sold. In use, they're built to withstand whatever the elements throw at it.

Among its more prominent models, the T3x and the newer T1x have gained a reputation as the most adaptable rimfire rifles available, thanks to the modular stock allowing the user to switch out pistol grips to improve their aim and angle and achieve multiple shooting positions. In addition to interchangeable grips, the T3x includes additional screw placements on top of the receiver. Warne Scope Mounts' Tikka rings and mounts are further compatible with the T3, 695 and 595.

We have a keen understanding of what makes Tikka rifles so popular. That's why we use premium materials and precision engineering to make Tikka scope mounts. Our line of Tikka T3x scope mounts, rings and other bases gives you performance that enhances Tikka's already-impressive quality.

To ensure proper scope fitment, Warne has crafted a line of Maxima Tikka rings. Using durable, solid steel, our Tikka mounts and rings use a vertically split design that handles recoil while remaining in place.

We account for the Tikka rifle receiver's specific design - particularly, the grooved receiver and how it's drilled and tapped for scope bases or rails. This feature lets the user attach a dovetail ring without having to use a base first. Solid steel aligns with Tikka's proprietary rail design, as well as the rifle's specific tolerances. For your Tikka rifle, find both 1-inch and 30-mm scope rings, as well as bases and picatinny rails.

In continuing Warne's vision of innovation and adherence to quality manufacturing, all Tikka scope mounts and rings are engineered and designed in the U.S. We support each product with a lifetime warranty.

What kind of Tikka rifle do you have? Do you use it on the range, in the wild or both? Contact us today - we always enjoy talking with fellow shooting enthusiasts. We will help you find the best scope rings for your intended application, and share some of the tips we've learned along the way. For decades, Warne Scope Mounts has delivered confidence in every shot.